Tinnitus during the pandemic

Tinnitus is a widespread condition: one in three people in Australia live with tinnitus and one in six experience it constantly. A study by Hearing Australia showed that up to 70% of people aged 18–35 years old have experienced tinnitus, with 16% experiencing it more than once a week. Between 70 and 85% of people with hearing loss also experience tinnitus.

Although often associated with an underlying condition, such as age-related hearing loss, an ear injury or a problem with the circulatory system, there are many other factors that influence the occurrence and perception of tinnitus. In particular, stress can be both a trigger and an intensifier for the experience of tinnitus. Many people report that their tinnitus is more noticeable when they are in quiet spaces. Both these factors help to explain why Tinnitus Australia has seen a huge increase in the demand for advice – via our social media accounts and telephone line – during the pandemic. The anxiety and disruption associated with lockdowns, increased isolation and lack of accessible support combine to mean that tinnitus has been especially distressing for people.

In the last few weeks, we’ve seen an uptick in support requests of a different nature. As Australia’s vaccination program finally picks up speed, Soundfair is receiving calls from people reluctant to have their second shot because they have developed or increased their tinnitus after their first jab. Tinnitus is a, thankfully rare, recognised side effect of Covid vaccination. Data from the UK’s Yellow Card scheme for reporting adverse effects suggests that tinnitus affected around 5000 people from 45.5 million first doses equivalent to approximately one in every 10,000 first doses.

The impact of tinnitus can be devastating, increasing risk of depression, anxiety and even suicidal ideation. The International Tinnitus Journal reported in 2017 that 45% of tinnitus sufferers experience anxiety and 33% have major depression. People with tinnitus often also experience insomnia, difficulty falling asleep, waking in the middle of the night and early morning, morning fatigue and chronic fatigue. The combination of tinnitus and insomnia has been assessed to give whole-person impairment ratings of up to 50%, depending on the individual’s ability to perform regular daily activities, daytime alertness and level of self-care.

Tinnitus, despite its ubiquity, is poorly understood and frequently underestimated as a cause of suffering and distress. Unfortunately, it is not unusual for health care practitioners to tell people that there is no cure, or that they will have to learn to live with it. Although research has not (yet) found a way to stop all forms of it from occurring, there are effective tinnitus therapies available that can provide significant benefit. Reassuring people that tinnitus is common and referring them on for assessment can be a crucial first step in validating what can be a frightening and traumatic experience.

We’re advocating for all primary care practitioners to be proactive when tinnitus is reported and be aware that in the environment of the pandemic the impact of living with tinnitus is likely to be more severe. 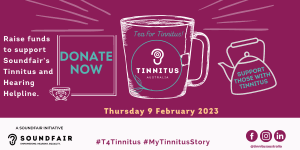 Help us raise $20,000 for Soundfair’s Tinnitus and Hearing Helpline so that those living with tinnitus can get timely support

THANK YOU FOR YOUR INTEREST.

One of our team will be in touch with you about the upcoming campaign we
have planned. In the meantime, you can find out more about what we do
and how we help here.

Make sure you’re following us on both the Tinnitus Australia and Soundfair
social media channels too.